Like many other film fans, this past weekend I saw Jurassic World.

By far the best sequel that at once provided the franchise a new jumping-on point while simultaneously paying homage to the original on multiple levels.

So since I’ve got dinosaurs on the brain, I thought I’d pick my top three set pieces from all four Jurassic Park films. The only catch: I restricted myself to just one choice from each movie…

[FYI: Spoilers for Jurassic World in #3]

Perhaps the most iconic set piece in the entire franchise. When NBC aired the original movie a couple of weeks ago, I put it on in the background while cooking dinner, but didn’t plan to watch the whole thing. Of course, the infamous T-Rex scene comes on and I’m hooked till the very end. The raptors in the kitchen scene is iconic too, but nothing can match the extended scene where the king of the dinosaurs escapes his paddock and everything generally goes to hell. 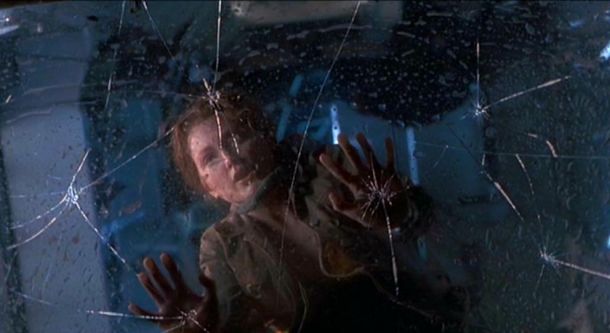 For all its faults, The Lost World: Jurassic Park is not a terrible film. It has that studden visual moment where a pack of raptors stalk fleeing humans in tall grass – and of course there’s the T-Rex rampaging across San Diego in an extended sequence that reeks of Spielbergian child-like glee. But the standout set piece in the film has got to be when angry Mama T-Rex knocks the trailer-cum-science lab off the side of a cliff, trapping the humans inside on a piece of precarious glass above a very high drop.

As much as I loved the newest entry in the Jurassic canon, I have to admit that – for all Colin Trevorrow’s masterful director – it was a little anticlimactic. So instead of that dinosaur free-for-all, I’m going to choose the moment the flying pteranodons and dimorphodons swoop down on the theme park’s crowded main street and generally cause carnage.

At the heart of the scene is the film’s most controversial death but inarguably one of the most jaw-dropping: Zara is grabbed, flown into the air, tossed about a bit, and eventually dropped into the water. Pteranodons dive into the water and capture her again, before she and her attacker are swallowed from below by the massive mosasaur.

Trevorrow said the purpose of the scene was to trick the audience into expecting one thing, but instead something else happens to distract them – then the thing they originally thought was going to happen (but have since forgotten about) happens. He wanted this moment to revert the entire audience to eight-year-olds – and it worked! The reason it’s not slightly higher on this list? Practical effects trump CGI every time.